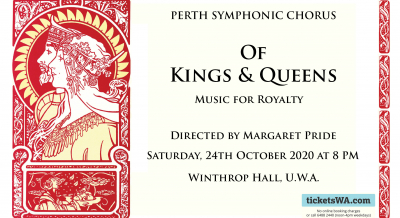 Of Kings & Queens will be an inspiring concert of English music for royalty. Handel’s thrilling Coronation Anthems will dominate the programme, including the stirring Zadok the Priest, an anthem performed at every coronation since its premiere at the coronation of King George II in 1727. Written with the full splendour of a coronation in mind, the orchestration is exciting - with the exhilarating full textures of the chorus reinforced by scintillating trumpets and timpani. It takes very little imagination to be there in Westminster Abbey, side by side with royalty and the elite of the landed gentry!

Other works for royalty will include Coronation trumpet fanfares, The Arrival of the Queen of Sheba played by ‘wunderkind’ organist Alessandro Pittorino, and works written by amateur composer Henry VIII, including the perennial Greensleeves arranged for an eight-part unaccompanied choir, as well as elegant dance music from his royal court.

Come join Perth Symphonic Chorus and conductor Dr Margaret Pride OAM for its first post-Covid-19 lockdown concert and indulge in a little royal fantasy, letting the music take you to an era of spectacle, glamour and awe.